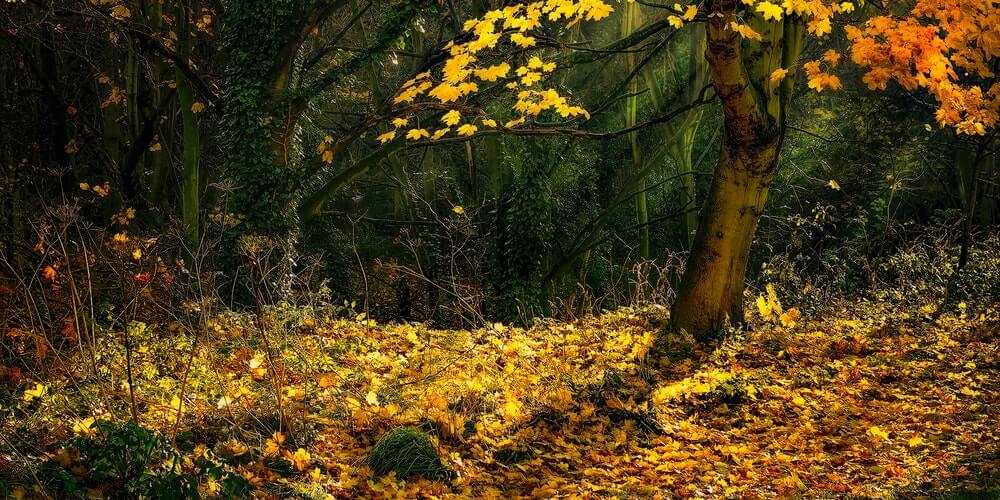 The autumn days are really enticing. Early in the morning, a feeling of thrill runs down my spine as I look out at the fog-wrapped nature around me.

The blanket of fog makes the houses; the trees and even the nearby lake seem a little far away. I could feel my feet tingling with the desire to go out for a walk there in the world of nature.

So off I went in the bliss of the autumn morns, along the lakeside where the trees stand, tall and majestic, among the grasses which are contentedly drinking the fresh dew drops.

Overhead the vast sky was like a canopy of blue and had white fleecy clouds floating all over it. Once out there the touch of the cool autumn breeze made me feel as if somewhere deep inside a part of me was reborn again.

All worries seem to seep away like water from the washtub.  I had a momentary vision that heaven was not something I had to dream about anymore because it was right there; I had it all around me in that autumn morning. There was a gladness to be alive, to be able to feel so good about a day that had started just like any other ordinary day.

Out into the world, I took off my slippers and with my bare feet daintily began to feel the dew-drenched grass. The cool wet touch gave the senses a feeling of delight, a pure exhilaration.

“Breathtaking!” I muttered to myself feeling strong to express some of my gladness. I continued to walk along barefoot.

My feet were covered with dew and dirt and made me feel all the more like a part of nature itself. Some dry leaves from the trees fluttered down with the passing breeze.

They brushed my face and hands. They two were wet from the fog that still covered the treetops like a veil. Here and there the soft sunlight showed itself upon the ground.

One can see the line of the sun rays as they penetrated through the fog. I had a feeling as though the sunlight was extending a hand of welcome to the fog, to the beauty of autumn.

As I walked on slowly I noticed some withered jasmines on the grass.   They were a beauty! The rich whiteness of their petals and the soft orange of their stems seem to pay compliment to the green color of the grasses.

I looked up and found the large jasmine tree from which the flowers had withered. The flowers need not be sorry to have withered, I told myself.

They looked so beautiful on the green carpet of grass! A very soft and sweet fragrance of the jasmines mingled in the air. As a gust of breeze passed through the trees more flowers fell. Some of them laid gentle kisses on my face on their way to the ground.

They reminded me of the saying, “falling leaves return their roots.” Among these withering flowers was the reflection of the truth that life will inevitably see its end.

We must all return to the Creator from whom we have come. The flowers had bloomed and had silently bestowed us with their beauty. Could our life to be similar?

Must we too not give to others as much of ourselves as we can in a lifetime? There indeed is a lesson to be learned from the silent gift of the flowers.

Autumn always reminds me of Chittagong my village home. My home is situated on a hill. The hill is honest among a chain of hills that surrounds it.

In late autumn one had to stand on our hill to witness a breathtaking view of the early morns.  Blankets of fog would cover the land below the hill and make one feel as if one is on top of the world.

Then as the sun rose the rays would penetrate through the fog and slowly bring out the green paddy fields and the clusters of palm trees huddling around the village huts.

One had the impression that one was cleaning a piece of transparent glass and looking through it. As the sun-rays fell on the dewdrops on the ground they sparkled like thousand diamonds.

Far away from the hill, the river would be glistening like a silver snake under the brilliance of the sun.  Sometimes one could see boats sailing with their white sails up just like toys.

The whole village scenario lying below would be like a fairyland, so serene and peaceful. On the top of the hill, my grandfather had rows of jasmine trees planted which would be blessing us with the abundance of their flowers in autumn.

The grasses would be almost hidden beneath the creamy white flowers. The flowers would be bathed with dew and picking them would be all wet from the pure and cool dew drops.

I would often hold a handful of flowers against my face just to feel their wetness and my heart would soar to a state of ecstasy.

Autumn in My Heart

The autumn mornings, I have witnessed in my village home, always filled my heart with glad tidings for the whole year. Autumn’s place in the whole year is sort of bitter-sweet.

Coming just before winter in a way it wishers of the year’s end.  On the other hand, the end of the year also means that we are going on to another new one.

Autumn’s sun holds back the lazy warmth of the summer passed and yet there is also the thrill in the touch of the sun against the bare skin that reminds one of the winters.

Thus on the autumn day when I stood under the clear blue sky, trying to let the warmth of the rising sun seep onto my body and yet at the same time trying to feel the refreshing touch of the coolness in the air, I remembered few lines from poet James Thompson’s poem Autumn.

“When Autumn scatters his departing gleams,

The swallow-people: and, tossed wide around,

Over the wide sky in convolution swift…”

There are some trees along the lake that are celebrating the autumn with their leaves turning yellow and shedding them in order to have their boughs covered with new leaves.

Few “Kash” flowers add to the charm of the fallen yellow leaves with their white wispy look. All of a sudden a cuckoo flew in and settled down on a bare branch of a tree and starts cooling.

The cuckoo is supposed to be the messenger of spring and yet the cuckoo was cooing away to his heart’s content on a cool autumn morning.

I thought he might be the black sheep of the family! On the other hand, I was also thinking that indeed is nature, unpredictable in so many aspects.

Looking up at the sky I was surprised to see some dark clouds gathering the sun. It looked as if we were in for a drizzle.