The Grand Canyon- Mountain Lying Down

How to Get Back the Lost Zest for Life

Right Form of Verbs for SSC

The Grand Canyon- Mountain Lying Down 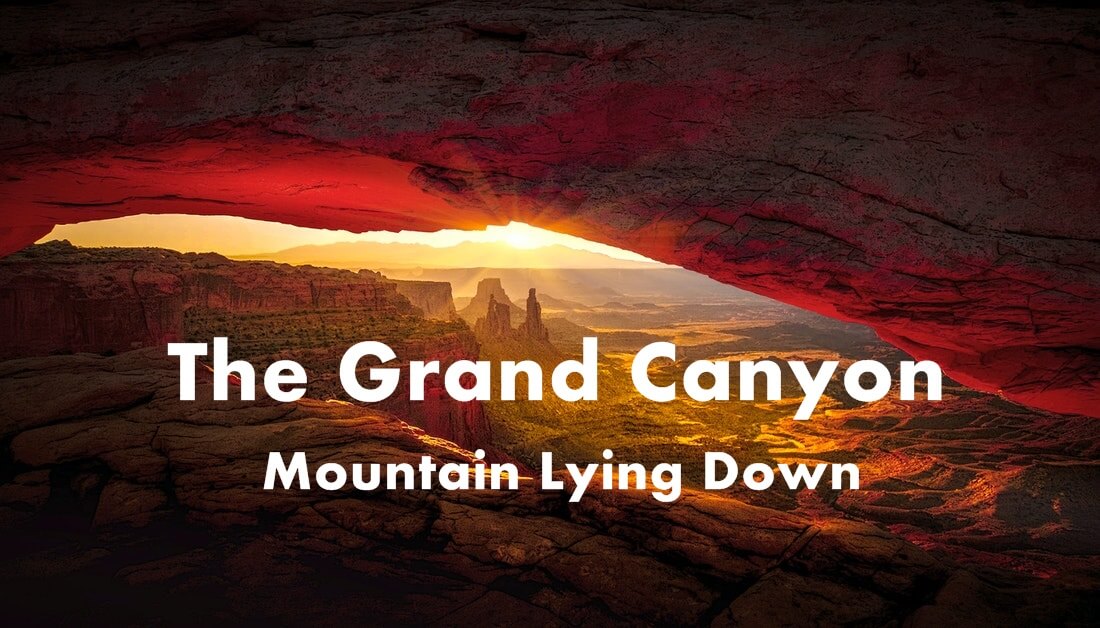 A gash in the earth beyond imagining from 600 ft to 18 miles across, reaching down from cool, piny plateaus to the scorching desert, exposing nearly two billions years of earth’s history, preserving shelters and shrines and storehouses and the arts and crafts of Native Americans who have found a home here for at least 4000 years. Some still call it home.

The Indian tribes call it Kaibab or “Mountain Lying Down.” The first Spanish men to see it dubbed it “Gran Can’on”. No matter in what name it is known by, The Grand Canyon-a spectacular gift from mother nature to mankind.- remains as awe-inspiring today as it must have been to the first people to stumble upon it. And the description above speaks volume.

There perhaps is a bit of romanticism in all of us.   My more knowledgeable friends tell me that this trait is more universal in children, albeit, in varying degrees.

Things we read about in our younger days would very often be the vehicles of our imagination, propel our minds to lands beyond the seven seas.

My vehicle for my formative years’ imaginations was Bhibutibhusan’s Aparajita. Apurba. As a young lad was an avid reader of storybooks, the more favorite ones being tales of travels that used to be published as Bilat Jatreer Chithi (letter of going to London).

Apu would read that the Italian sky was the bluest or that there is a statue of Victor Hugo in a Paris park, and would resolve to visit all those places when he grew up.

As a preteen youngster, I used to identify myself with Apu and longed to see those strange places. Those childhood impressions were so strong that in later years when I went to Paris for the first time, Musee Victor Hugo was very prominent on my list of museums to be visited.

The statue at the square, I believe, was destroyed during World War 2. Southern Italy,  as close to the Mediterranean as possible, of course, was next to the itinerary. I cannot, through, recall the sky there was as blue as I had expected it to be.

Several years ago I read the quoted description and I promised myself a trip to the Grand Canyon at the first opportunity.

The opportunity came last year when my wife and I decided to travel abroad for six months-most of that period spent visiting with our children currently living in North America.

The highlight of our travel on this occasion was a 3-week trip by car from Key West, in Florida to Santa Monica, in California.

The journey across seven of the states in the USA was a very interesting one indeed. The Grand Canyon deserves a special place in my tale.

This nature’s wonder is one of the world’s most outstanding spectacles. In form, glowing color, and geological significance, it is regarded to be unsurpassed.

At no other place in the world is such a vast view of Time displayed so clearly. Each stratum of rock –excavated by the mighty Colorado River-distinctly marks the period of the Earth’s history, claimed to be, from 2 billion to 250 million years ago.

The first recorded viewing of the canyon by a non –Native American was in 1540 when Don Lopez de Cardenas, a captain on Coronado’s expedition in search of the Seven Golden Cibes of Cibola, stumbled upon the great gorge.

More than 300 years later John Wesley Powell led the first expedition to explore the length of the canyon. It took the expedition 3 months to cover the 280-mile distance, and of the 10-men expedition team, 7 returned.

President Theodore Roosevelt gave it the status of a national Monument in 1908 and several years later it became National Park.

The park has an area of over 1,900 square miles and 280 miles of the Colorado River runs through the park.

So varied is the climate in the park area that six of the seven climate belts recognized throughout the world are represented in the Grand Canyon region.

Many hundred small ruins of ancient Indian pueblos (towns) have been discovered in the Canyon and on the rims.

Of them, the Havasupai tribe was present before the first European explorers arrived in 1540. Part of the canyon is named after this tribe.

The National Park draws some 5 million visitors each year and the South Rim, which remains open throughout the year, is by far the more popular tourist spot.

Heavy snows close the North Rim roads most of the winter. Since we were traveling from New Mexico on Interstate Highway 40, which runs well south of the Canyon, we decided to go to the Grand Canyon Village on the South Rim.

Of the two major approaches to the par from the 1-40, we select the route via Flagstaff and Williams that runs through the Kaibab national forest famous for its pine trees. The view along most of the route is quite picturesque.

Admission to the park area is by a 7-day permit that costs $10 per private vehicle. Since dusk was approaching fast as we entered the village, we decide to first go to one of the observation points along the Rim to watch the sunset, or the sunrise at the Grand Canyon is more spectacular.

But, both sights are highly recommended. I promise my readers that foregoing the beauty sleep at least one morning in order to be able to get one of the several observation points well before sunrise time (check previous evening) will be worth the trouble.

We were so awestruck by the magnificent sunset views that it was well into the evening by the time we got to our hotel.

Accommodation at the park is reasonably priced but advance booking is recommended.

It was very evident that the entire tourist facility infrastructure was designed to make everyone’s visit as comfortable as one can afford and as interesting as one would like it to be.

All facilities are managed extremely efficiently and by private operators who pay a royalty to the park authorities.

I wish governments in this part of the world were brave and intelligent enough to consider similar modus operandi wherever service to the public is involved.

The cafeterias attached to each lodge are good fun: very spacious, number of food counters, bars for those that wish to indulge and, of course, the inevitable tourist shops.

One could spend hours just sitting and watching the visitors-a truly international crowd.

By the time we finished our dinner, it was nearing midnight and since we did not want to miss the sunrise the next morning, we called it a day.

The morning call was at 4.30 am and we were on our way to Mather Point, one of the observation points, at 5:00. It was still dark and we actually had to use torchlight to make sure that we did not get too close to the rim.

Even at that hour of the morning, we were not the earliest ones to reach the Mather Point.

Sunrise on that morning was at 5:20 and well before that the place was full of tourists-tiny tots to some very elderly citizens near where were sitting.

Just waiting for the sun to come up was an experience. There was the morning stillness in the air, the silence among the spectators matched the quit Nature- people were speaking in whispers only as if nose might discourage the sun from making its appearance.

But, when it did appear it was truly glorious.  I wish I were able to describe in words my experience of that particular moment.

Those readers, who have ever watched sunrise either across the sea or over the mountain, will know what I am not being able to translate in words.

I have had the good fortune of watching the sunrise both at Tiger Hill and at Puri and I do hold the opinion that the experience at the Grand Canyon has no parallel.

The tourist facilities include a conducted sightseeing shuttle service in motor coaches along the South Rim that offers startling views into various sections of the Canyon.

We took the morning trip over the West Rim Drive, which includes Trail View, Hopi, and Pima Points and leads to Hermits Rest, a unique cliff house with an observation lounge and porch.

The shuttles run every 10 minutes or so and one has the freedom of getting off at any not allowed on this drive except in the case of physically disabled visitors.

The major observation points along the East Rim are Yavapai, Moran, and Lipan. The Watchtower towards the end of the East Rim offers an unsurpassed view of the Grand Canyon, the Painted Desert, and Kaibab National Forest.

Several Trail Trips are offered as well. These conducted trips on mule-back, we gathered, provide the most intimate and awe-inspiring views along the trail that goes down to the bottom of the canyon are also available.

These trips, however, are recommended for able-bodied visitors only and since the writer is not so young anymore and has had an open-heart surgery a couple of years ago, he was dissuaded from trying any of the trips.

We also saw several groups of young men and women back-packing down the trail.

A word of advice to those that wish to venture: the number of people taken on each trip is limited and advance reservation is a must unless one is planning on staying at the Canyon for weeks.

The two highest peaks in the Canyon are called The Vishnu Temple and The Zoroaster Temple.

Being curious, I checked at the Visitor Center and was advised that the names refer to the Canyon’s exposed rock layers.

The pink-colored layer at the bottom is known as the Zoroaster Granite. The layer above that, called the Vishnu Schist, apparently was formed almost 2 billion years ago.

Not so ancient is the Grand Canyon Railway, which has been running a daily service between Williams and the village since 1901. we saw a train arriving around 10 in the morning –it was a beauty.

We gathered that some of the coaches date back to 1920 and are still drawn by turn-of-the-century steam engines.

A very noticeable feature of the American life throughout the Canyon was the local’s concern for the preservation of the wildlife-the animals, the flora, and fauna.

Everywhere there were prominent notices about not feeding the animals, not leaving plastic bags around; exotic trees were labeled, flowerbeds were abundant everywhere.

I have often wondered whether it is just their affluence that makes them so nature-loving or is it a national characteristic!

We enjoyed our visit to The Grand Canyon tremendously and when we left the village, two days later, our only regret was that we had not allowed for more time at the Canyon in our travel plans.